You are here: Home / The Area / Eastpoint 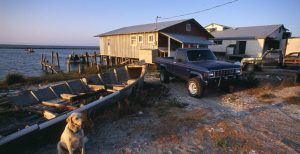 Eastpoint, just across the Bay from either Apalachicola or St. George Island, is the central point of the Forgotten Coast where one can truly feel untouched by today’s world. A place where seafood docks stretch almost the entire length of the community and you can dine on the bay while watching the shrimp and oyster boats bring in the day’s catch.

Apalachicola Bay oysters are among the most delectable and nutritious seafood in the world. They are also a very important part of the Franklin County economic picture. More than 1,000 people are employed by the million-dollar industry in the County. Historically, Franklin County harvests more than 90% of Florida’s oysters and 10% of the nationwide supply. Within Franklin County, oysters make up almost one-third the value of commercial marine landings. 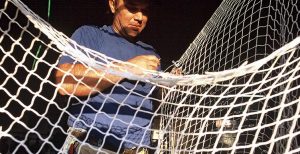 Apalachicola Bay encompasses the waters of St. George Sound and St. Vincent Sound, which provide an ideal environment for oysters. This 210-square-mile estuary is wide and shallow, averaging between six and nine feet deep at low tide. The estuary is dominated by the Apalachicola River, which provides nutrient rich fresh waters vital to the Bay’s natural productivity. Oysters grow rapidly in these waters reaching marketable size in less than two years. Apalachicola Bay produces some of the nation’s highest quality seafood.

Tongers (traditionally called "oystermen") harvest the oysters today in the same manner they have for a century. From small wooden boats 20-23 feet long, using tongs that look somewhat like two rakes attached in scissor-style, the oystermen bring the oysters to the surface. The oysters are brought on board and sorted on a culling board where they are separated by size. Oysters must be at least three inches in length to be considered legally harvestable. The oysters are then stored in burlap bags and shaded until they reach the shore. On shore, the seafood houses employ "housemen" who sort the oysters and package them for sale either in bags or boxes, or send them to be shucked, washed and sold in pints or gallons. 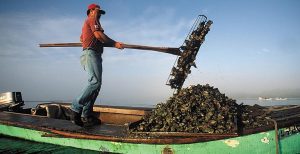 The Bay is carefully monitored by the Department of Environmental Protection to ensure the health and productivity of the oyster beds. As early as 1949, the state was involved in restocking oyster shell into the bay to create new oyster bars. It is estimated that 750 acres of bars have been constructed since then.

Many may not be aware that oysters are one of the healthiest items you can add to your diet. They are low in calories, one dozen raw oysters contain approximately 110 calories, rich in iron and high in calcium and vitamin A.