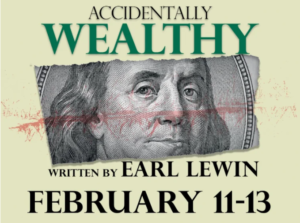 Accidentally Wealthy chronicles the story of Reggie and Grace Worthing, recent newlyweds embarking on their new life together, a new life marred by tragic pasts.  Both were widowed under mysterious circumstances.  Reggie lost two wives to accidents. His bank account has grown with each loss. His new bride, Grace, lost her husband to suicide, afterwards, her bank account also saw a healthy increase. Accidents? Suicide? Or was it murder?  Returning from a month-long honeymoon abroad it appears that someone’s life is in danger. Is it Reggie’s or is it Grace’s? Could one of these seemingly carefree people be a murderer? Or, are they truly Accidentally Wealthy?