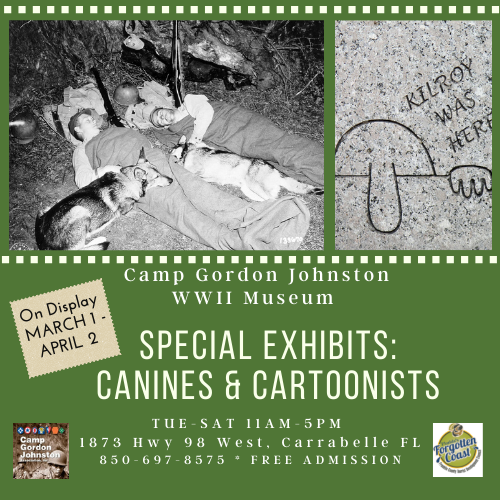 Camp Gordon Johnston WWII Museum in Carrabelle is presenting two special exhibits to honor our country’s Canine Military Veterans and recognize the Role of Cartoonists in WWII.  These exhibits will open Tuesday, March 1 and will be on display at the museum until Saturday, April 2.  The museum is open every Tuesday through Saturday from 11 am to 5 pm. There is no charge for admission but donations are gladly accepted.

National K9 Veterans Day, March 13, is a day set aside to honor commemorate the service and sacrifices of American military and working dogs throughout history. Dogs served in many capacities in wartime, including in WWII, as messengers and sentry dogs, but did you know that they were also trained for mine and explosive detection, finding injured soldiers and flushing enemy troops from hidden spaces? Dogs’ keen sense of smell and acute hearing made them valuable assets in war and today for national security. This exhibit will recognize the important service that they loyally performed during WWII.

The press was essential for keeping the public informed in wartime, but cartoonists and cartoons played a unique role in bringing the war to citizens. Did you know that the cartoon figure and possibly America’s earliest meme, Kilroy, is actually engraved on the WWII Memorial in the National Mall in Washington D.C.? Camp Gordon Johnston Museum will share images of familiar characters like Private Snafu, Donald Duck, Willie and Joe, and Kilroy who all play a prominent part in WWII history. The exhibit will also present the works of cartoonists like Bill Maudlin and Dave Breger, as well as the animated works by Disney and Warner Brothers that served as both propaganda for citizens and training for servicemen.

Table Top and Board Game Club