You are here: Home / Events / Butts & Clucks Cook-off on the Bay

Butts & Clucks Cook-off on the Bay 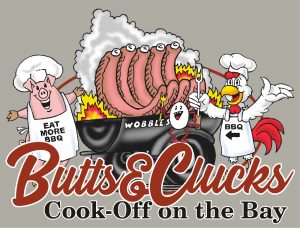 The 5th annual Butts & Clucks Cook-off on the Bay, this event is sanctioned by the Florida BBQ Association. With over $12,000 in prizes to be awarded and the winner moving on to the Jack Daniels Championship. The event will be held on January 20th, 21st and 22nd in Battery Park in Apalachicola.
Include there will be a judging seminar on Thursday, January 21st for anyone interested in being a state certified BBQ Judge.
Also, during the event we will be having a Deviled Egg (The Cluck that came from the Butt Contest) contest to be judged on Saturday the 21st. Sauce Contest on Friday evening after Team meeting and a Mystery Box Challenge ( Chopped Style ) We also have awards for Best Rig and Longest Haul. Also one lucky team who finishes 1-10 in any category will win a brand new Butts & Clucks QDS smoker.