You are here: Home / Events / Anniversary of Iwo Jima and African American Servicemen 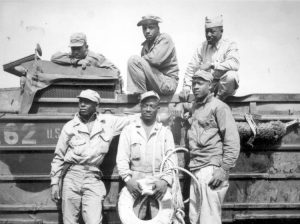 amp Gordon Johnston WWII Museum presents special exhibits commemorating the anniversary of the Iwo Jima Battle and African-American Servicemen. These exhibits will open Saturday, February 1 at 11 am and be on display at the museum until February 29, 2020 at 5 pm. There is no charge for admission but donations are gladly accepted.
75 years ago on February 19, 1945, the 4th Marine Division stormed the island of Iwo Jima. Deployed with them was the 476th Amphibious Truck Company, an African American unit that trained at Camp Gordon Johnston. Although the 476th was part of the US Army, the company was assigned to the artillery forces of the 4th Marines for the assault landings on the island. This much decorated unit was part of the heavy fighting that day and the following days.
Throughout the month of February, the Camp Gordon Johnston Museum will have the special exhibits commemorating the anniversary of the Iwo Jima Battle and honoring African American servicemen in WWII including the 476th Truck Company, other amphibious truck units as well as the Tuskegee airmen, who trained at nearby Dale Mabry Field in Tallahassee. Exhibits will include photos, video, and artifacts including some from the Marine Corps. The museum will also be screening several films , including “Red Tails”, “Letters from Iwo Jima”, and “Flags of Our Fathers” and will also have a vintage WWII vehicle on display at special times in February. Be sure to watch the museum’s Facebook page for the schedule or call the museum for dates and times.