You are here: Home / Events / Earl David Reed: The Secret of My Unsuccess Comedy Tour

Earl David Reed: The Secret of My Unsuccess Comedy Tour 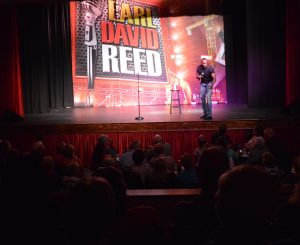 Earl David Reed is a trendsetter in the comedy and radio world. Within his 15 years of stand-up comedy, Earl has performed at over 100 comedy clubs and colleges and is a favorite in Las Vegas and Atlantic City. Along with his 10 years of morning broadcasting experience and numerous television appearances, his improvisational style has become a favorite of radio and stage audiences all around. His genius is the way he interacts with the crowd. He has a way of knowing just who to pick on to get the biggest laugh, and the audience loves it! The Las Vegas Review-Journal called him “…an urban Don Rickles!” And Don Rickles himself commented “This guy works the room like a Las Vegas Showgirl… funny without being offensive.” His TV credits include The Tonight Show with Jay Leno, HBO, Showtime, Fox’s Comic Strip Live, A&E’s Comedy on the Road, and NBC’s Friday Night Videos. Earl can also be seen on DVD as one of Bill Engvall’s All-Stars of Country Comedy comedians with Larry the Cable Guy and Jeff Foxworthy. We’re thrilled to have Earl return to grace the Dixie stage with his comedy for his 4th appearance, don’t miss it!